Roswell one of the hottest markets… in the nation

If you’ve spent any time in Metro Atlanta (or even considered moving here) you know some of the hottest real estate markets are north of the city. I’ve been working this area for more than a decade, so a recent story in the Atlanta Business Chronicle came as no surprise…

NOTE: This press release was produced and originally distributed by the RE/MAX Network

DENVER (July 14, 2016) – With the market now in the midst of the popular summer selling season, both home sales and prices are rising with the summer temperatures. Homebuyer demand in June kept sales levels above last year’s by 0.7%, with a strong increase of 9.4% over sales in May. The Median Sales Price in June was $229,900, which marks a 2.2% increase over prices seen in June 2015. As year-over-year price increases moderate, there’s a positive impact on home affordability. The number of homes for sale in June fell 15.6% from levels one year ago, making inventory supply a significant challenge, especially in West Coast metros. At the rate of home sales in June, the national Months Supply of Inventory was 3.2, a slight improvement from the 3.0 supply seen in May.

“Last year was the best we’d seen in a long time for home sales. So, it’s encouraging that sales this year are remaining above last year’s levels. Moderating prices are a good thing for this market. Homeowners are still seeing improvement in their equity, while there’s less chance of homebuyers being priced out. We have to wait out the ongoing inventory challenges, but the month-over-month stabilization we’re seeing is a very good sign,” said Dave Liniger, RE/MAX CEO, Chairman of the Board and Co-Founder.

“Nationally, home value increases are well within the healthy range. Although, variances across the country can influence owners’ perception. It’s important for homeowners to realize how they perceive their home’s value could vary widely from how an appraiser views it, since it can make or break a home sale or mortgage refinance,” added Bob Walters, Quicken Loans, Chief Economist.

In the 53 metro areas surveyed in June, the average number of home sales was 0.7% higher than one year ago, and was 9.4% higher than the previous month. Sales are slightly above the strong numbers seen last June and are also above the 6.7% average of month-to-month increases from May to June over the last eight years. Like previous months this year, June home sales continue to be strong in the Northeast. Across the nation, 31 of the 53 metro areas surveyed reported sales higher than one year ago, with six experiencing double-digit increases; Augusta, ME +22.7%, Las Vegas, NV +13.2%, New York, NY +13.1%, Trenton, NJ +11.1%, Cleveland, OH +11.1% and Hartford, CT +10.2%.

The number of homes for sale in June was just 0.7% lower than in May, but 15.6% lower than in June 2015. Like May, June had a sequential inventory loss of less than 1%. The apparent stabilization of inventory on a month-to-month basis is a positive sign, especially during the summer selling season. Based on the rate of home sales in June, the Months Supply of Inventory was 3.2, which is nearly identical to last month and last year, 3.0 and 3.6 respectively. A 6.0 month supply indicates a market balanced equally between buyers and sellers. The number of metros with a Months Supply of Inventory below 2.0 may also be stabilizing at 8, down from 10 in May. The eight metros with less than a 2-month supply include Seattle, WA 1.2, Denver, CO 1.3, San Francisco, CA 1.3, Portland, OR 1.5, Boston, MA 1.5, Omaha, NE 1.8, Dallas-Ft. Worth, TX 1.9 and San Diego, CA 1.9

About the RE/MAX Network

RE/MAX was founded in 1973 by Dave and Gail Liniger, with an innovative, entrepreneurial culture affording its agents and franchisees the flexibility to operate their businesses with great independence. Over 100,000 agents provide RE/MAX a global reach of nearly 100 countries. Nobody sells more real estate than RE/MAX, when measured by residential transaction sides.

RE/MAX, LLC, one of the world’s leading franchisors of real estate brokerage services, is a wholly-owned subsidiary of RMCO, LLC, which is controlled and managed by RE/MAX Holdings, Inc. (NYSE:RMAX).

With a passion for the communities in which its agents live and work, RE/MAX is proud to have raised more than $150 million for Children’s Miracle Network Hospitals® and other charities.

The RE/MAX National Housing Report is distributed each month on or about the 15th. The first Report was distributed in August 2008. The Report is based on MLS data in approximately 53 metropolitan areas, includes all residential property types, and is not annualized. For maximum representation, many of the largest metro areas in the country are represented, and an attempt is made to include at least one metro from each state. Metro area definitions include the specific counties established by the U.S. Government’s Office of Management and Budget, with some exceptions.

Marie Dinsmore has been awarded the Certified Negotiation Expert (CNE) designation from the Real Estate Negotiation Institute (RENI).  The CNE designation is earned by real estate professionals who have successfully completed formal negotiation training over the course of two days.  In regards to negotiation skills, gents who receive this certification are among the top agents in the country.

With professional negotiation skills, agents are able to help clients obtain better results when selling or purchasing a home.  CNE agents have a higher skill level, which enables them to 1) communicate more effectively to uncover desired information, 2) help clients understand their options, 3) work collaboratively with others, and 4) resolve deadlocks.  CNE agents also have a thorough understanding of how to effectively negotiate to help their clients achieve their goals.

Marie Dinsmore is a Realtor with RE/MAX® All Properties in Cumming, Georgia who specializes in luxury homes, estate properties, and estate homes in the North Georgia area.  These types of properties require keen attention to detail, as well as an experienced understanding of the needs required by the buyers and sellers in this highly specialized division of the market.  It is this client focus which has made Dinsmore a top producer for years, along with her belief in hard work, dedication to her customers, and a true passion for the real estate sector.  In 2014, she was given The Best of Trulia Top Agent Award, The Five Star Professional Award, and named RE/MAX® All Properties Top Sales Associate for 2014.

Individuals in North Georgia who are looking for a Certified Luxury Home Marketing Specialist (CLHMS) who is also a Certified Negotiation Expert (CNE) can contact Marie Dinsmore at 770.712.7789 or visit www.DinsmoreTeam.com. 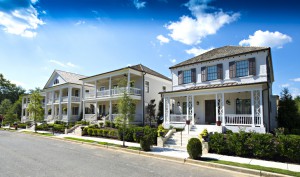 If you haven’t already heard about the homes in Vickery, you need to!  Known for its rich architectural character and stunning live-work-play setting, this charming development features sweeping green views, striking courtyards, an abundance of parks, and sprawling front porches.

With homes produced by John Wieland, one of the nation’s top homebuilders, each property boasts innovative floorplans, gorgeous exteriors, and specialty craftsmanship that you simply will not find anywhere else.  With that, if you’re tired of the look of cookie cutter neighborhoods, you’ll be thrilled to feast your eyes upon one-of-a-kind designs that vary from one home to the next.

Homeowners in Vickery also enjoy access to a myriad of shops and dining (within walking distance), as well as the Forsyth County YMCA at Vickery Village, an expansive community pool, tennis and basketball courts, and a beautiful neighborhood pond.

Each home comes standard with:

If you would like to learn more about this truly unique community or would like to schedule a showing, please do not hesitate to contact me.